Andre Mount holds a PhD in music theory from the University of California at Santa Barbara and is currently an associate professor of music theory at the Crane School of Music at SUNY Potsdam. He has presented in North America at annual meetings of the American Musicological Society, the International Association for the Study of Popular Music (US Chapter), and the Society for American Music, as well as in Europe at the Keep It Simple, Make It Fast conference. His articles have been published in Music and the Moving Image, Journal of Musicology, and the Journal of the Society for American Music. He has also contributed to projects intended for general readership including The Encyclopedia of American Music and Culture and maintains an OER site for musicianship training at The Trained Ear. 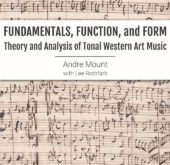